Come with Mr. Trashcan as he takes you, through the miracle of reincarnation, back to 1930 or so, where we will go for a ride in a Zeppelin.  Mr. trashcan has removed from that last sentence the name of the most advanced passenger airship ever built, the Hindenburg.  It is all Mr. Trashcan can do to keep you from opting out on this voyage, with a variety of lame excuses.  Which is a shame.
END_OF_DOCUMENT_TOKEN_TO_BE_REPLACED

Mr. Trashcan himself hasn’t been around all that long.  BUT.  We steel appliances are subject to a form of reincarnation, via the scrap yard, and our sheet metal retains a kind of genetic memory of earlier times.   Thus I am able to take you back to the 1950s, well before the cost of Health Care got out of control in the US.   Blue Cross was just starting to be offered.  Middle class people could afford to pay for health care out of pocket, but the people at Blue Cross saw a market: they would protect you from a sudden, health-related financial hardship by converting it to a steady monthly drain spread over your whole life.  These steady drains, from millions of patients, would form a steady river of money, flowing through them, from which they could dip.
END_OF_DOCUMENT_TOKEN_TO_BE_REPLACED

From time to time, people throw paperback books into Mr. Trashcan.  It happens quite a lot, and, having almost unlimited free time, since he doesn’t go anywhere, Mr. trashcan reads these books.  Except stuff like those Tom Clancy books where people are in control and technology really works – too far fetched.
Anyway, among MT’s favorite books are the ones that are UFO-related; you know the ones I mean… there’s the classics like Eric Von Daniken and the old Zecharia Sitchen book The 12th Planet.  There’s the pretty straightforward stuff that’s desperately trying to be scientific, like the Jacques Vallee books.  And then there’s the real nutball stuff… MT remembers a rare hardback written by a real Silly Old English Colonel called Space, Gravity and the Flying Saucer that purported to describe the interior of a flying saucer, using pure deductive reasoning.
END_OF_DOCUMENT_TOKEN_TO_BE_REPLACED

New carbon-based storage/communications technology promises cheap, permanent archive and retrieval of text and graphics.
June 27, 2009, Chapel Hill, NC —  At first glance, Dr. Buli Safid’s lab on this quiet NC campus seems like the last place you’d expect find a game-changing innovation like CS/VFM.  There are no bubbling retorts, no oscilloscopes and most conspicuously, no computer screens.  But it is in these unassuming surroundings, strewn with sheets of the material he calls “vegetable fiber mat” that he and a small group of dedicated students have created the most important advance in information technology since Gutenberg.
END_OF_DOCUMENT_TOKEN_TO_BE_REPLACED

Sell everything.  Hopefully you already did.   Buy those Canadian Maple Leaf coins; everybody recognizes them and knows that they’re pure gold.  Gold is about the only commodity that has held it’s value over the ages:  a man’s suit of clothes, custom made, costs the same in gold today as it did in 1812, for example.
END_OF_DOCUMENT_TOKEN_TO_BE_REPLACED

Dateline: Detroit
General Motors today held a press conference to unveil the first new car since its merger with the Government of the United States and Mr Trashcan had a front seat with other distinguished members of the press. GM spokesperson Ivan Gregory opened the proceedings, “Today we are announcing a new age in American automobile, the Chevy Comrade™, THE vehicle of choice for the American patriot citizen.”

END_OF_DOCUMENT_TOKEN_TO_BE_REPLACED

Apex, NC,  Mr Trashcan Labs:
The crack MTC Labs™ scientific team who brought you the Ten Pound Eyeball®, Haxcalibré and Operation Ivy, are today, proud to announce a major breakthrough in the (un)natural evolution of the tomato.  As proof, the following photograph of a truly unique, ripened tomato were presented to shocked press corps members. 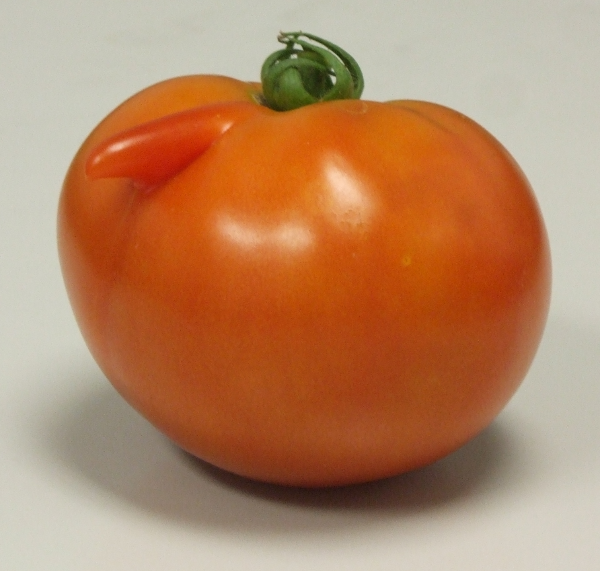 END_OF_DOCUMENT_TOKEN_TO_BE_REPLACED

A middle-aged Cambodian man and his son emigrated to the US.  The man had been a prisoner in a notorious camp under the Pol Pot government, where he had suffered at the hand of one Major Liu. “They torture me every other day,” he said to his son, holding up the black and white photo of the young Major Liu in civilian clothes.  He had somehow obtained this snapshot, which showed a smiling young man, dressed for tennis.  “if you ever see this man,” he said to his son, “you kill him.”
END_OF_DOCUMENT_TOKEN_TO_BE_REPLACED

“Grizzled veteran”, those were his words, right? Shit. What gives that pasty, greasy teenager any right to comment on my nature?  I suppose a number of episodes might qualify him as “veteran”, but “grizzled”… what does that even mean anyway? Very little of the pointless mission lecture registered with the vet following that comment and probably just as well. As the silenced helo skirted the edges of one ratty pile of mortar and rubble after another, one look at the blackened cityscape ahead summoned visions of missions past into the tightly muscled figure of the war-fighter. He had been here before. No, not in this specific city and obviously not with the same team, but he’d seen enough combat against idealistic “insurgents” in bombed out, inner city shells to know this hell hole would be no better, and no less dangerous. The interior of the helo was dimly lit and shadows from the smoldering jump light danced over the half-dozen or so faces that joined him. He figured he would be lucky to see half of them tomorrow.
END_OF_DOCUMENT_TOKEN_TO_BE_REPLACED