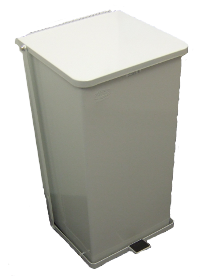 Mr. trashcan lives in our office, near the refrigerator.  Technically, he’s an ordinary-looking square metal trashcan, foot pedal operated lid, ivory colored, takes standard kitchen trash bag, etc.  One each.  But from here on, we leave the realm of the ordinary far, far behind, because… and this is the Miracle… Mr. trashcan TALKS!   Not all the time, and not to everyone, but, as witnessed by many sober, professional people, he talks a blue streak when conditions are just right.
To be completely honest, he only talks when he’s in the presence of this one guy named Frank.   We don’t know why but, sometimes, when Frank stands really near him, his lid will begin to go up and down and out will come this completely incongrous falsetto voice, garbled and muffled, to be sure, but always comprehensible.  The relationship between Frank and Mr. Trashcan is so important that, when Frank is away, Mr. Trashcan becomes depressed and sometimes won’t talk for days, even after Frank has returned.   But, everyone agrees, Mr. Trashcan is always a good listener.
At some point, I decided it was important for someone to document these remarkable conversations, as a record of what happened here, and in the hope that Science can one day provide answers.